I created solutions to increase video binging across our web and mobile applications on the BuzzFeed Tasty team. 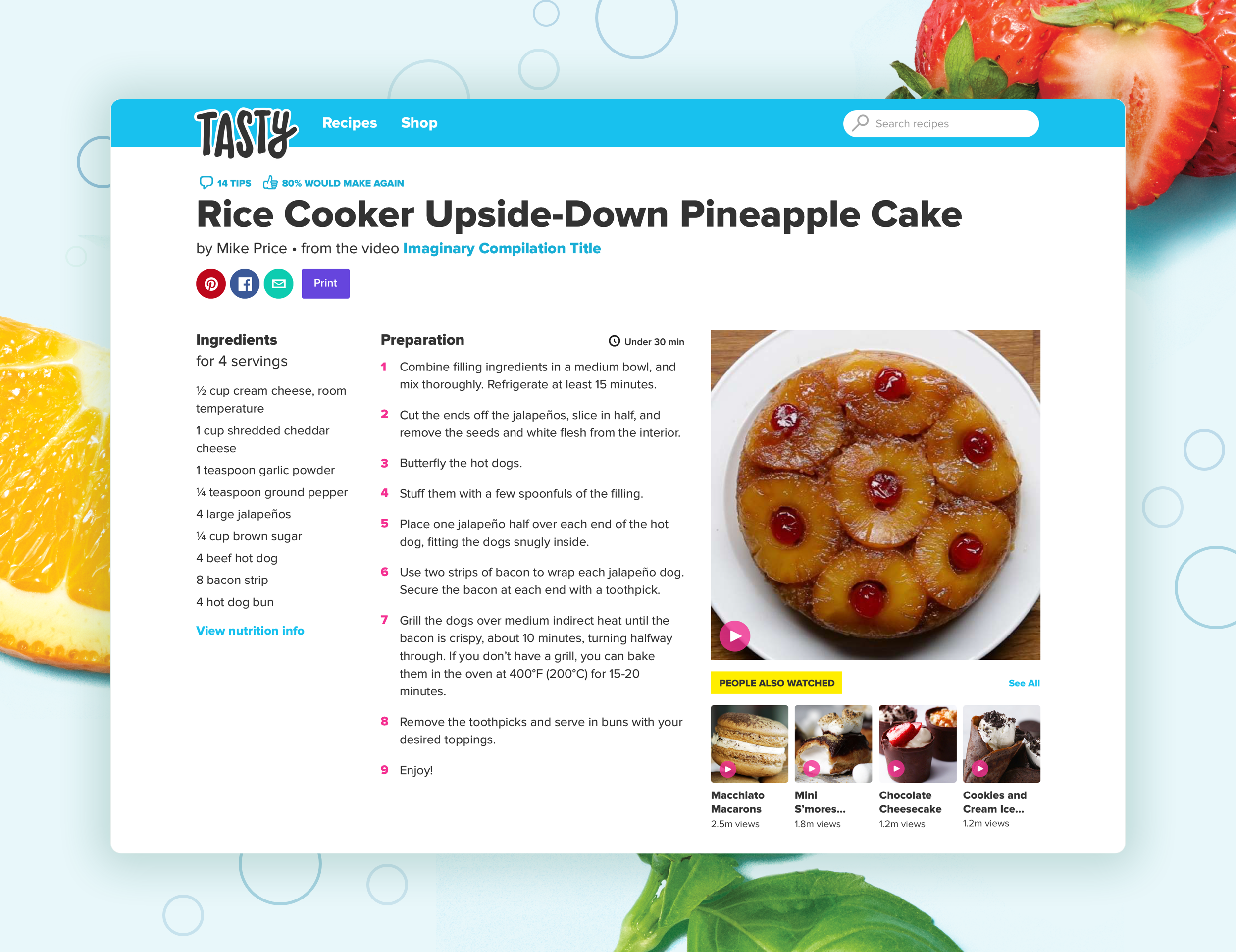 Background
During my internship, BuzzFeed's Tasty was the #1 most followed Facebook page, had 7.9 billion YouTube watch minutes, and stood as the #1 most watched media and entertainment publisher.‍
It was primarily for recipe discovery and cooking, with users coming into the site through Tasty social channels or recipe searches on Google. Ever since the platform implemented video autoplay, there was significant increase in time spent per user on the site overall.

This led the team to believe that there was untapped potential for Tasty.co to support more video binging scenarios in addition to its practical cooking use case. There were existing avenues to allow users for users to find other recipe pages such as "Related Recipes" and "More Like This" tags, but only 7% and 4% of users would click on them respectively.
BuzzFeedTasty platform circa 2018
Goals
The success metrics we were aiming for were more time on the site per daily active user and lower exit rates for recipe and compilation pages. My product manager crunched the numbers believed that 3 second views per daily active user should be the target metric we'd strive for.

Few screens from my internal research
Internal Research
To spur the initial stages of my design process, I began by talking with other designers across different teams at BuzzFeed who had worked on similar projects in the past.

In 2016, a feature was shipped to certain BuzzFeed Videos audiences to observe if recommended videos would turn one video view into 2+ video views. This feature showed video suggestions to users at 25%, 50%, and 75% completion rates on a video. The results were that there was no significant movement in key metrics. The data suggested that people were clicking on related videos, but not that frequently (~.11x per user, or once every 8x).

In 2017, another study was done on BuzzFeed Videos to understand how users discover content and choose what to watch. It was also conducted to learn how users engage with BuzzFeed’s longer form video content differently than other content. The results were that auto-advance was most-touched play setting (1/2 of the users turned it off). It was only valuable to users in certain contexts, like when binging a show on Netflix.

On BuzzFeed Quizzes, a recent feature at the time (a button on mobile that appeared after a quiz was completed to allow users to take a new quiz) raised activity by 4%. By implementing this new way of accessing more quizzes, users were motivated to take more and increase their time on our site. 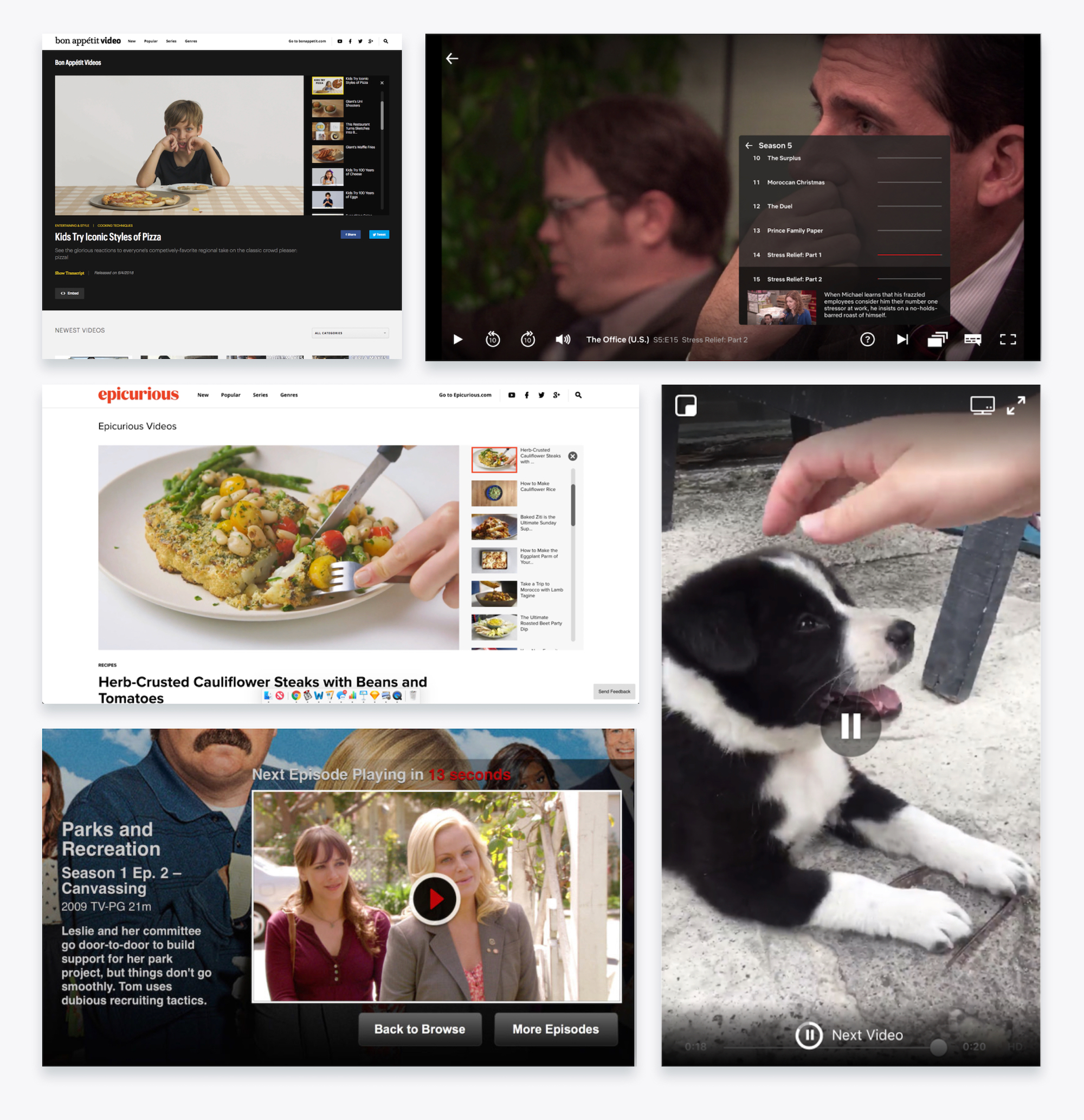 Screenshots from my competitive analysis
Competitive Audit
I then proceeded to conduct a competitive audit based on four different types of platforms and evaluate the trends I saw.
‍
Recipe Platforms: AllRecipes, Bon Appétit, Delish, Epicurious Video, Food Network, Kitchen Stories, Project Foodie, Tastemade Video, Serious Eats
‍
The trends with recipe platforms was that there'd usually be a showcase of a playlist of other video content directly underneath or to the side of the video that’s being played. The wording used was usually “Up Next”, “Newest”, “Related”, “What’s Cooking.” The platforms usually attempted to redirect the user to a new video after the current video has completed, where the recipe video on the redirected page would usually be auto-played on load. Countdowns were especially prevalent and there was usually no way to cancel or pause the timer (which was 5-10 seconds at most).
Entertainment Hubs: ABC Go, NBC, Netflix, TED Talks, Variety, Vice Video, Vimeo, YouTube
For entertainment hubs, mouse-overs would typically show hidden CTAs in video player that display more in a popover or carousel.
Social Media Networks: Facebook, Pinterest, Twitter
Mobile experience favors binging. Page transitions in full-screen mode make it easy to hook in the user. Additionally, there's an emphasis on shorter clips and on auto-advance.
News Outlets: BBC News, Business Insider, CNN, Huffington Post, NYTimes Video, WSJ Video
These platforms would often use reels or carousels to show other similar or related content. This allowed users to interact and see 3-6 pieces of video content at once instead of a grid.
Moving forward, I decided not to focus on any in- player features due to technical concerns in implementation difficulty after speaking with engineers. The reasoning was also in part due to their lack of success in former BuzzFeed experiments.
Takeaways
Through my research, I learned that easy access to related/trending content incentivized clicking on additional media content. Also, making use of the full-screen real estate on mobile allowed for easy browsing interactions and auto-advance was not very user-friendly. 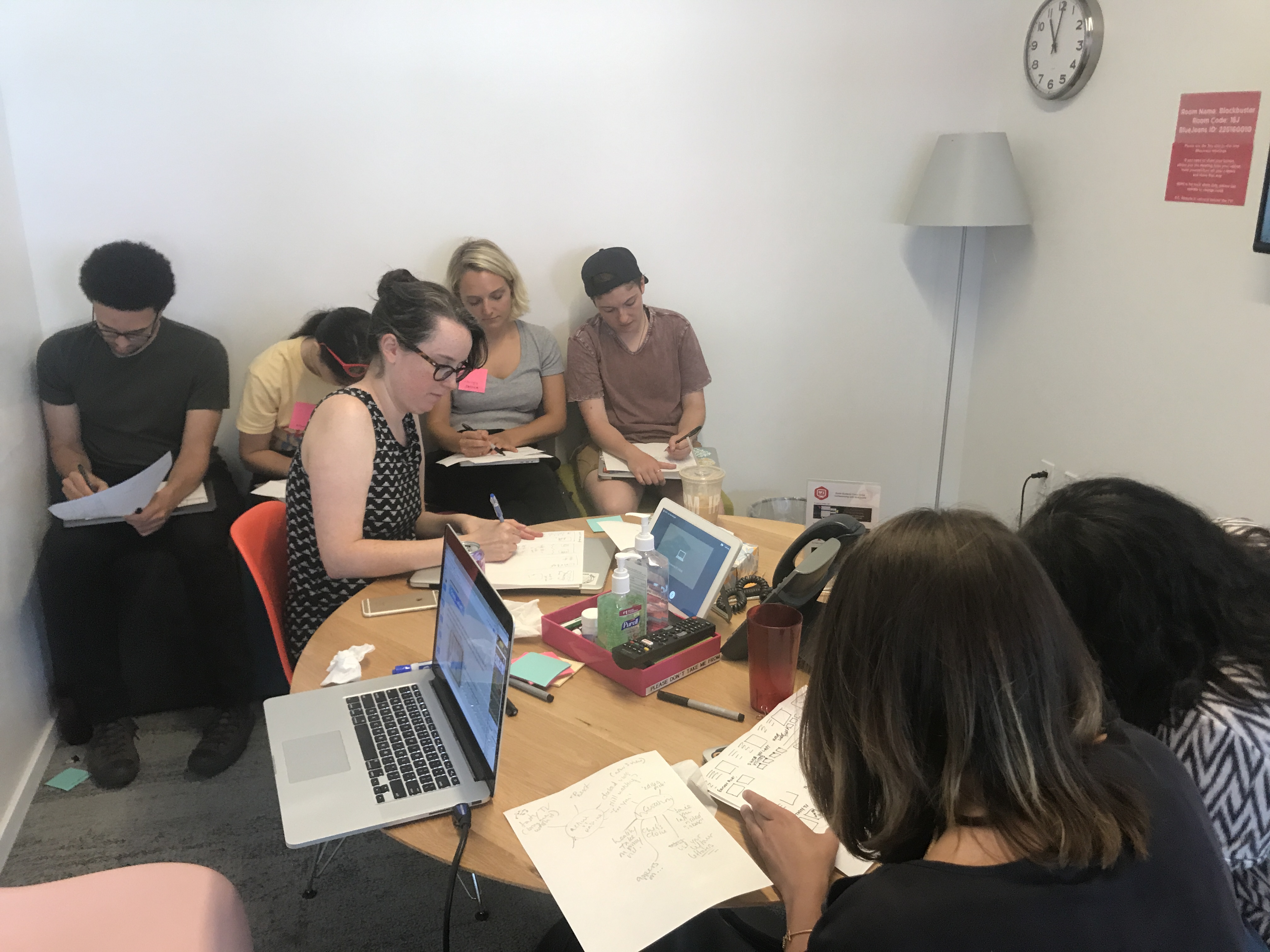 Quick snapshot taken during the design sprint
Design Sprint
I decided to kick-off the brainstorming phase of this project by hosting a short-form version of a design sprint. I recruited a PM, two designers, and four engineers who worked across different teams. By bringing varying stakeholders together, I was able to help them work towards a shared vision and encourage original thinking through experimentation and original thinking.

The entire meeting lasted for two hours and consisted of various activities meant to effectively frame the problem and come up with creative solutions. 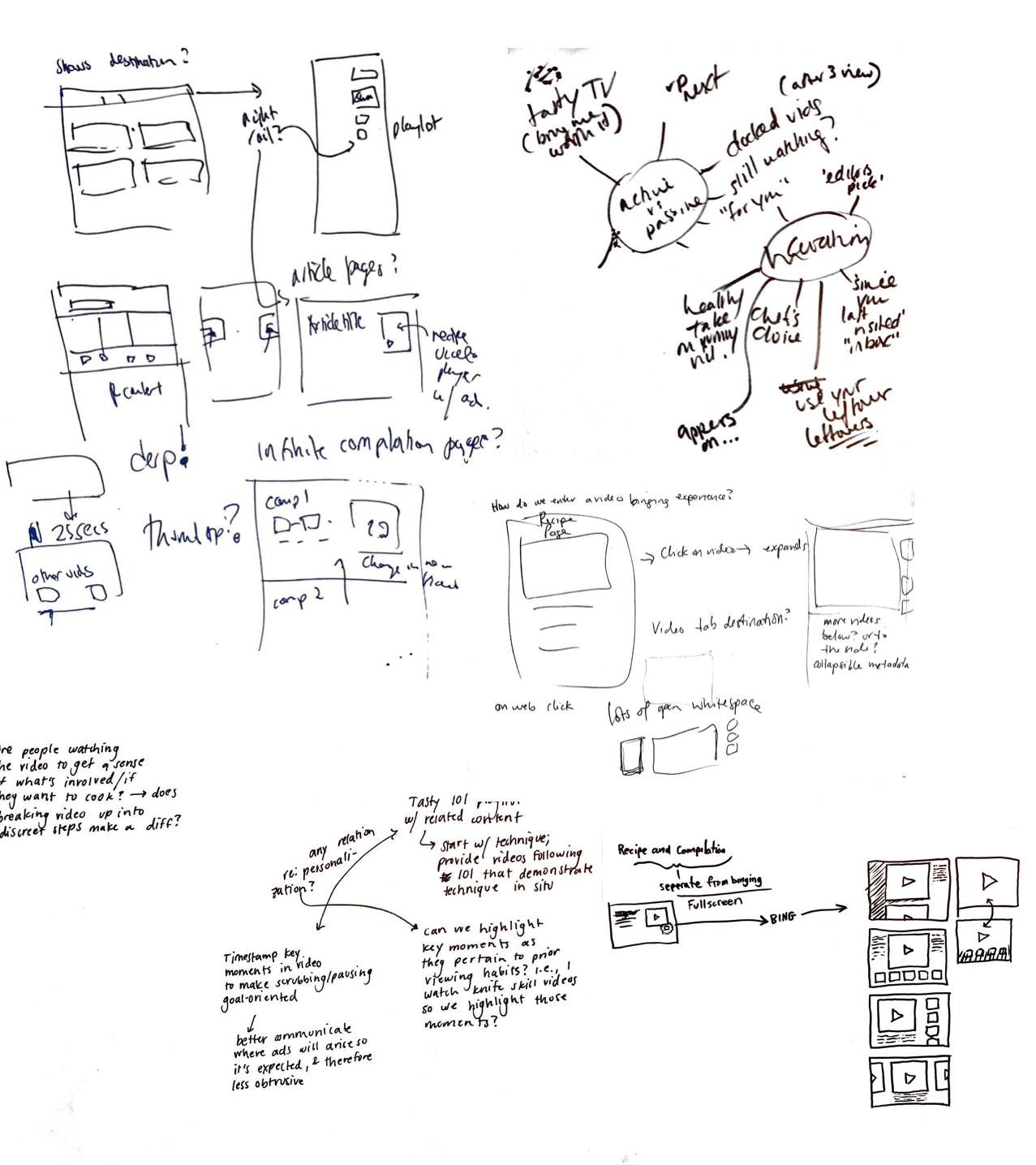 Some sketches from the design sprint
Results
Our group came up with a plethora of ideas for me to use going forward in my own brainstorming session. It sparked a lot of creative concepts to branch off of from a myriad of varying, insightful perspectives. Below, you can find the four prototypes I landed on from inspiration from the design sprint and from sketching ideas on my own. 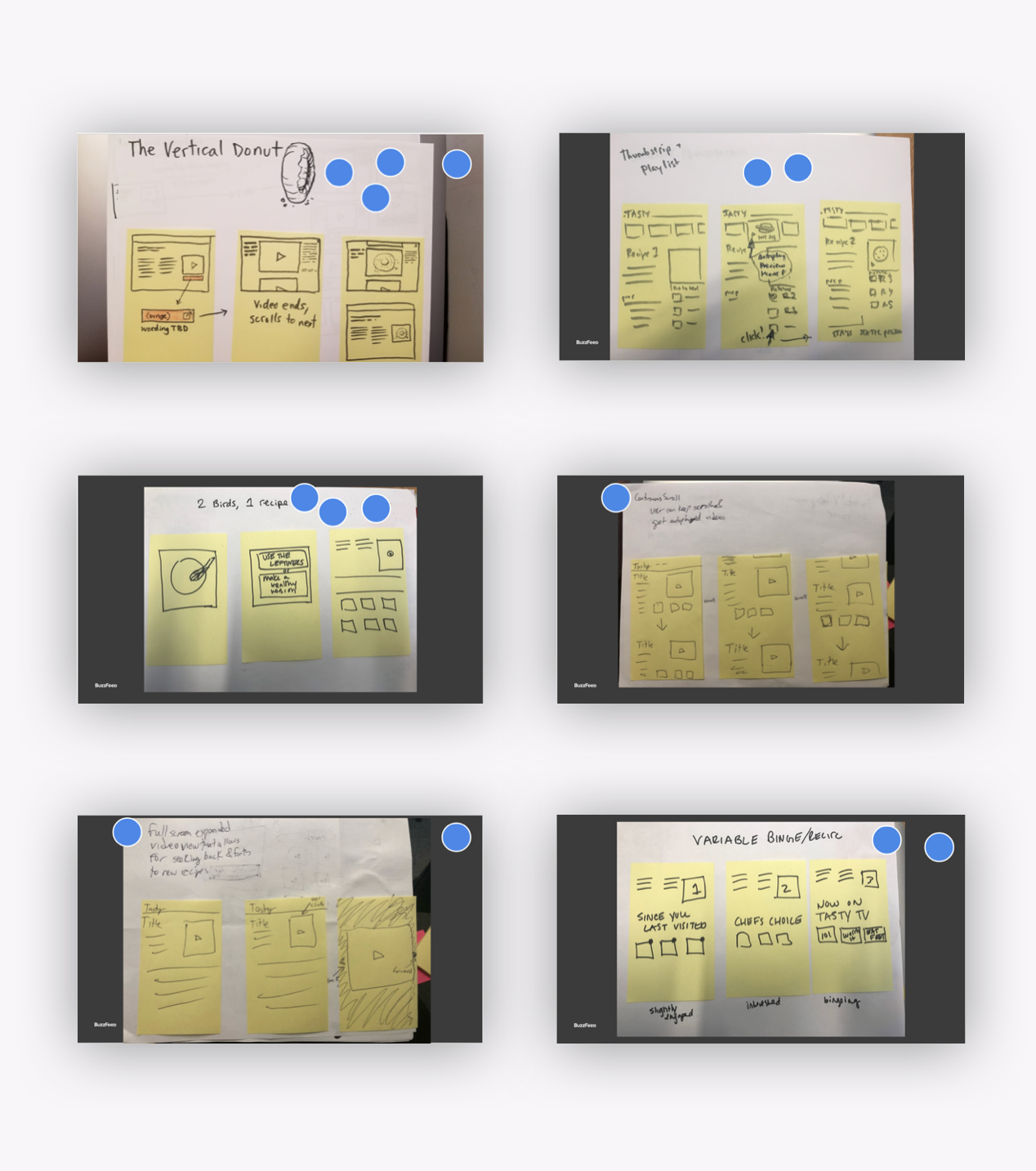 A few of the top-voted ideas from storyboarding
Usability Testing
We sent out a push notification on our native application to recruit users for the next phase of the project: usability testing. I recruited 4 Tasty users from across the country ranging in age, location, and salary range.

Each study lasted an hour; it was broken down into an interview about their general activity on Tasty followed by presentations of the prototypes I made for each of the concepts. 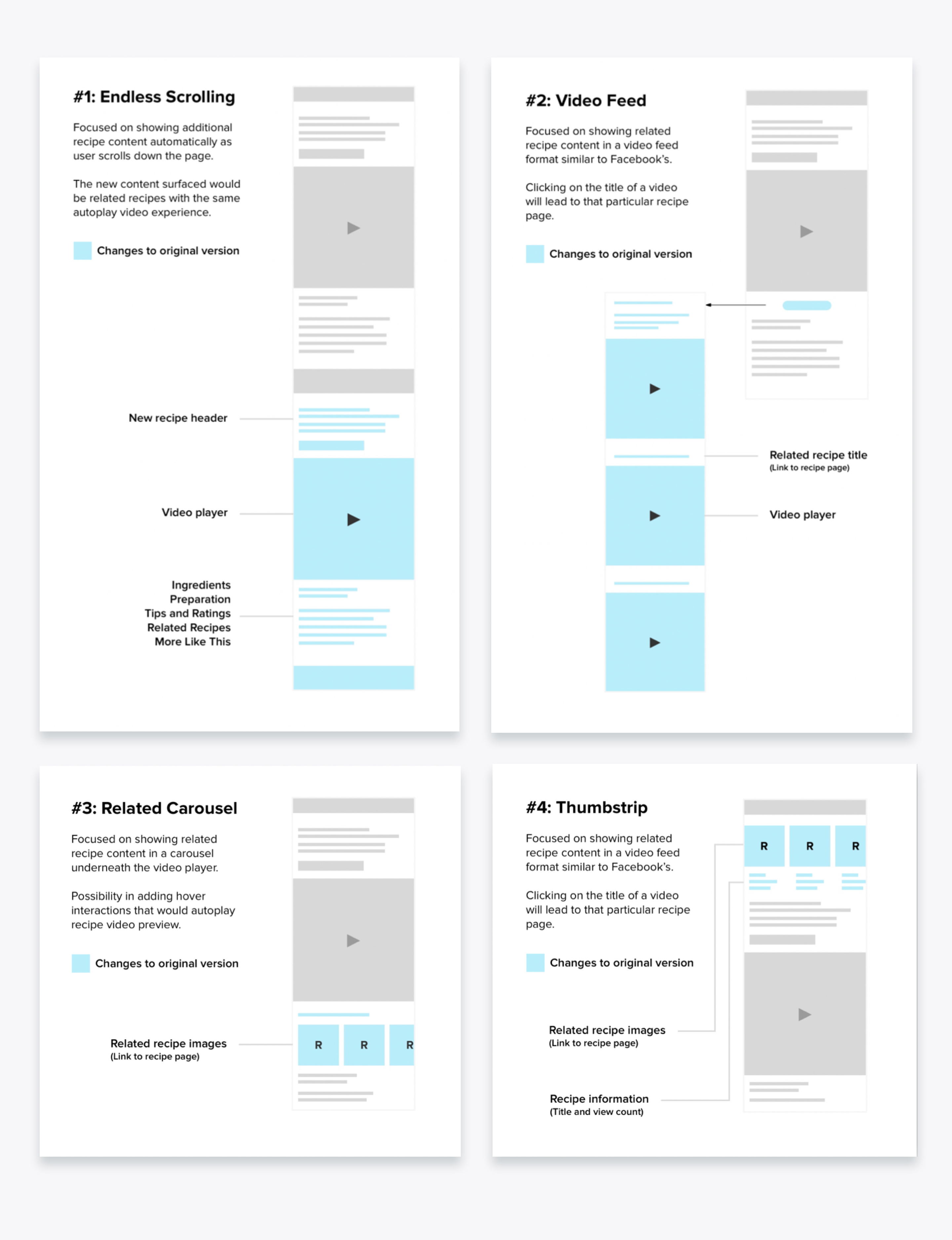 Four concept ideas I finalized for testing
Findings Analysis
General Activity
Most of our users go on Tasty everyday or, at minimum, four times a week. They prefer using Tasty on mobile and use it for recipe hunting purposes. They usually watch 5-10 recipe videos at a time before cooking to get a sense for whether or not they want to make the dish. To find other videos, they typically use the search bar or see what's trending on the homepage.

Endless Scrolling
1. Most users don’t usually scroll that far.
“Sharon" usually stops reading information on a recipe page once she realizes she has enough info to gauge whether or not she’ll make the recipe.
2. Most users were confused by the experience.
One user wouldn’t have known to continue scrolling if I didn’t tell her to.

Video Feed
1. Most users enjoyed the non-intrusiveness and “rabbit hole”-like experience.
The users liked how they could click on the recipe header and be redirect to that recipe page if it was that “attractive.”
2. Users would like to learn more about the recipe
Showing that “80% of people would try it again” would be a good incentive to click on a video. Possibly showing different categories or popular content would help too.

Related Carousel
1. Most users enjoyed the non-intrusiveness and “rabbit hole”-like experience.
The users liked how they could click on the recipe header and be redirect to that recipe page if it was that “attractive.”
2. Users would like to learn more about the recipe
Showing that “80% of people would try it again” would be a good incentive to click on a video. Possibly showing different categories or popular content would help too.

Thumbstrip
1. Users don’t know where to look.
"Page was busy with carousel on top." One user didn’t even notice view count.
2. Users don’t feel comfortable with its placement on the page.
“I’d go down the recipe first, but I would remember the carousel was there and want to search for it.” 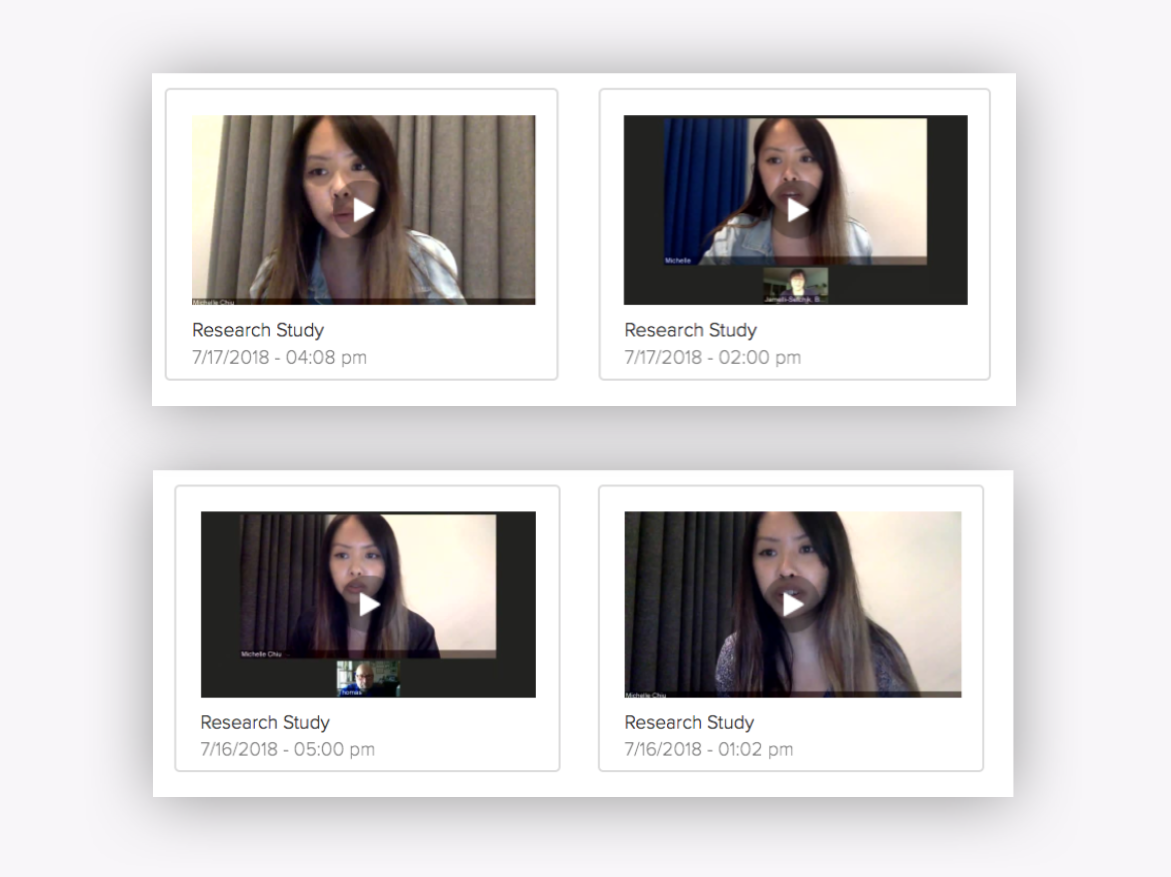 Screenshots from the recorded usability studies I did
Second Iteration and Testing Cycle
After analyzing the research findings, I decided to proceed with the "Related Carousel" and "Video Feed" designs. I updated and improved on the two concepts from feedback from the former usability studies.

Video Feed
• Added in metadata concerning % of people that would make again, ingredients, and steps
• Explored light aesthetic to fit Tasty branding
• Experimented with modal vs. back button, view count, and categories
Findings
• “Video feed” experience was a favorite
• Metadata was all considered important factors in deciding what video to watch next, but views remained
• Light mode fit better with branding of Tasty
• Modal experience allowed users to easily exit out of the experience
Final Designs 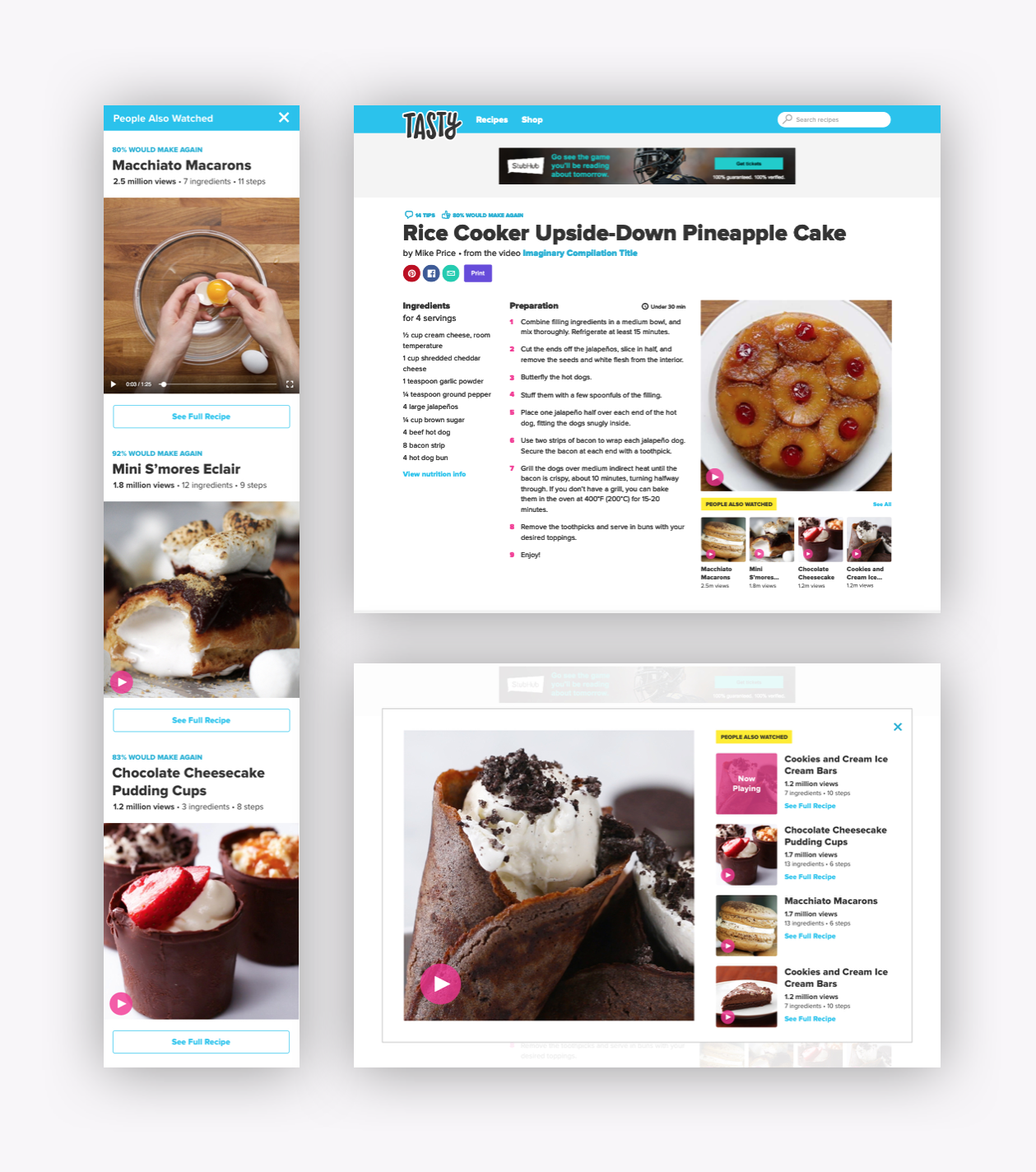 Mobile
• Placed underneath the preparation steps (users are only interested in other recipes if the current recipe doesn’t suit them)
• 9 recipe videos in carousel (based on user testing findings).
• “See All” shows videos outside of those listed in the carousel (larger variety housed in the feed).

Web
• Shows only 4 videos (users thought pagination added too many elements onto the page).
• “See Full Recipe” prompts the recipe page to appear, catering to the users who view videos to figure out whether or not they want to cook a recipe. 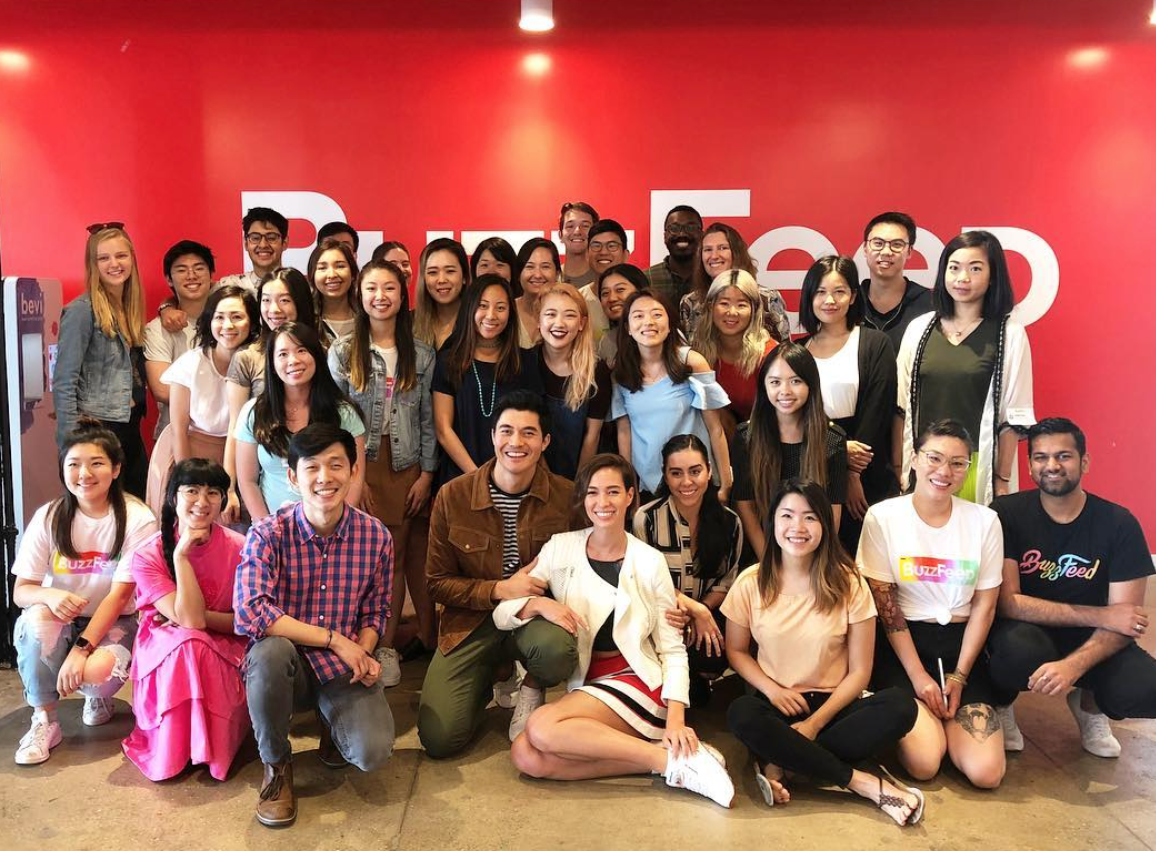 Internship Summary
My summer at BuzzFeed Tasty was nothing short of amazing. I ate way too many desserts from our set kitchens, took over the BuzzFeed Tech Twitter for a day with my friend Jarvis, circulated a "Which Intern Are You" BuzzFeed Quiz around the office, helped host a themed happy hour, met celebrity visitors, and—most importantly—learned what it was like to design for one of the largest entertainment and media publishers on the Internet.

You can learn more about my experience from a blog post I wrote here.
READ NEXT:   DOORDASH FOR BUSINESS